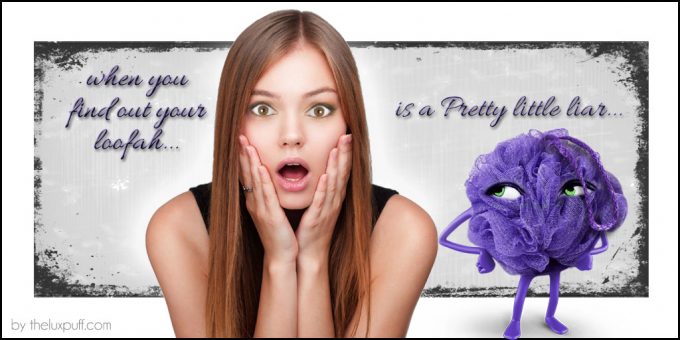 Let’s face it, everyone showers and/or bathes (at least we are hoping so!)  One of the most popular bath tools of choice is a bath pouf or a loofah, and why not? Loofahs produce lather better than anything out there. They gently exfoliate, removing our dead skin cells, and increase circulation.

The loofah seems innocent enough, just hanging around waiting for you to add your favorite soap or body wash and within a few seconds you have a ball of nice smelling bubbles ready to wash away all your cares (and dirt) from the day. Most often, after we bathe or shower, we hang our loofah to dry and it’s ready to do its job again the next day. Or is it?

We may think we’re being clever by hanging our bath tools up to dry out, hoping that the circulating air and lack of moisture will prevent bacterial growth. However, according to The Journal of Clinical Microbiology it takes almost 2 weeks of drying time to effectively kill off those pesky little microbes. Otherwise, they just lay dormant, waiting to be re-hydrated where the microbes spring back to life. Eww!

There is no shortage of articles and tips that talk about how to properly care for your loofah or bath tool. This one from Huffington Post titled “What’s Lurking in your Loofah” is particularly revealing. It’s not about using “scare tactics” because not all bacteria are bad. After all, we have naturally occurring bacteria in our bodies. It’s really about the bacteria from mold and mildew that, over time, can collect on our bath tools. It’s this bacteria that can cause skin irritation, infection, and breakouts; particularly for those who suffer from acne, eczema, and sensitive skin.

To the best of our knowledge, no one has ever died from a contaminated loofah – that’s just silly. Before developing the Lux Puff, we used loofahs daily without a second thought and they always had a pleasant scent from our body washes.  It wasn’t until we ran across several articles about bacteria in bath and beauty tools that we decided to take a closer look. We took a few of our loofahs apart and sure enough, trapped in the nooks and crannies were little specs of “something!” What’s worse, after unraveling the white rope that holds the loofah together, we found a string of gradient shades of grey and in some spots, black!

While unpleasant for sure, we couldn’t attribute any “physical” effects from the bacteria that was present. Even so, the sight of that… Well, let’s just say that our pretty little loofah wasn’t so pretty anymore and it certainly wasn’t clean!

Reputable manufacturers will suggest that you replace your loofah every 3-4 weeks. In the meantime, we could regularly nuke it in the microwave or drown it in a bleach bath but we don’t believe people want to have to do these types of things. And, it’s a pretty safe bet that there will be no show of hands for anyone in favor of adding a harsh chemical to their skin!

Now that our pretty little loofah has been exposed for what it is, perhaps it’s “time to say goodbye.”  But, not to worry, there is a new, and much improved, loofah on the block, certain to be “the one.”

The Lux Puff!  It’s a premium bath pouf infused with natural silver salt. This silver salt is assertive and clever in nature in that it doesn’t “kill” bacteria; rather it “stops it from growing in the first place!”

The Lux Puff offers you absolutely everything you want and expect from a luxury bath tool; the benefits of a quality loofah combined with the velvety soft, naturally absorptive nature of a microfiber washcloth. Most important, the Lux Puff will give you peace of mind knowing that “this” loofah will not be “hiding” anything from you… Ever!

College care packages – what NOT to forget

Summer is nearing its end and, for many, that means Back To School time! For…

Why we chose Polygiene for Bacteria Control

Why Bacterial Control? This seems like a good question to start with doesn't it? It's…